In this section you can learn about my various musical involvements and projects. In early 2016 Raphael Perle approached me in Farbarena’s quest for a new keyboardist. After our first rehearsal, where also Manuel as the new bass player joined the band, it was pretty clear that we had good musical chemestry and got along with each other well. We put together a show and performed a first live gig shortly thereafter. From then on it was mostly about songwriting and defining the band’s new style. In spring 2017 we recorded a couple of tracks in Vienna, we did a music video in autumn and right now we’re working on an album. Check us out at: farbarena.com. 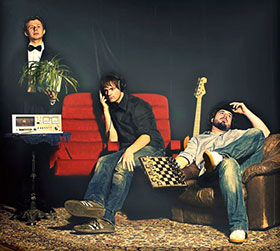 with Sebi Hödl (b) and Andi Senn (dr)

Only a few months after I had taken up my studies at the conservatory in Innsbruck I crossed paths with the drummer Andi Senn and the bassist Sebi Hödl, with whom since the last couple of days of Dec 2006 (we are still not sure whether it was the 27th or 28th we first rehearsed on) I have the honor to be playing with. During our collective years of studying we did many projects together featuring our co-students or external musicians and we also often appeared at sessions, especially at the Treibhaus in Innsbruck. In late 2008 we started working more intensively as a band and spent quite some time together «in the shed». On March, 13th 2009 we presented our programme in an intimate setting at Innsbruck’s Bierstindl. Some concerts in Austria should follow during the course of this year. In September we recorded our debut album, which was released in March 2010. At the moment Tapedeck unfortunately appears on stage quite rarely, but it is always a blast when we do. More: tapedeck.at

Kings of the UK 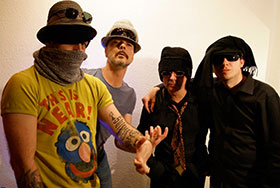 In October 2009 the Innsbruck-based Pop group Kings of the UK approached me in their search for a new keyboardist. In the coming months we spent some time playing together and I grew familiar with the band’s repertoire and style, which could be characterized as Brit Pop, though the group also incorporates all kinds of different influences from Jazz to Rock, Electronic and Drum ‘n’ Bass in their compositions. The new challenge I saw for myself when joining the band as a full member in early 2010 was that I had to become acquainted with playing, performing and – since I was also involved in finishing studio work that had begun before my time – recording Pop music, which is quite different to what I had done before. The band’s founder and band leader King Felix I. (Hans-Jörg Trabesiner) was and is a great teacher in the sense that I am more and more comfortable with the things that I am expected to do in this genre. Andi Schiffer on drums and Tom Neumayr on bass are two fabulous musicians that round up the band’s member list. In 2012, our first album was completed and it was released in mid 2013. More: kingsoftheuk.com 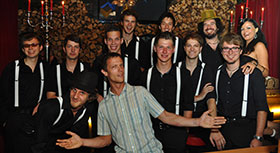 In early 2010, saxophone player Stefan Hörtnagl called me up to tell me about his revitalised project Parasoul, a Funk/Soul/Fusion group he had founded during his school days. His plan was to put together a new ensemble featuring some original members like himself, Marco Hollaus (guitar) or Sebi Hödl (bass) as well as manny new musicians. Ultimately the line-up would consist of eight instrumentalists and Ossi Weber as frontman and vocalist of the group. After detailed preparation the entire band first met only three days before their debut concert on July, 24 at the New Orleans Jazz Festival in Innsbruck. With a mixture of Soul and Funk, accentuated with a little bit of Jazz and Fusion, the crowd went wild during our show. Meanwhile the band has grown further and percussionist Thomas Büchel joined us as a full member. Various fun concerts have been played since then. More: parasoul.cc

In October 2007 bassist Artur Egger approached me to invite me to play with his band, at that time named EEG, depicting the initials of the last name of its members, Artur Egger, Willi Eisner on guitars and Harry Gschösser on drums. After a few rehearsals the band decided to take me in as their fourth member. Since then, we have been working on our repertoire consisting of Fusion and Jazz Rock pieces by composers like Billy Cobham, Frank Zappa, Miles Davis, etc. and our original material. Since 2011, Stefan Fritz on saxophone occasionally joins in. Nova Cosmos is «a bit shy» and public performances are very rare, yet always sold out. The band gives me the opportunity to play with four well-experienced musicians, who also bring a great deal of personality to the table. It is always fun and very productive when we lock ourselves in the basement for our rehearsal sessions. 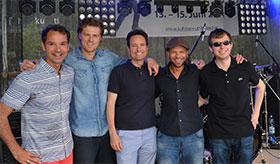 In late summer 2013 Innsbruck-based singer and songwriter David Blum called me in his search for a pianist/keyboardist for his newly assembled band. David had spent the better part of 2013 recording his debut album, which ultimately was released in November, and he was now looking to put together a lineup of musicians for upcoming concerts and live events. Although his style of music doesn’t entirely concur with what I personally like, I was intrigued to join the group, especially becuase of the fact, that David’s producer is Patrick Schmiderer, who I respect very much. After our first rehearsal session I was convinced to join and the group gave its first concert in February 2014. Many fun shows and gigs are waiting. More: davidblum.at 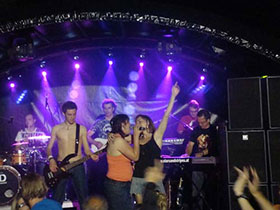 Contrary to all my other projects, the Stars and Stripes are a cover band, which means that my job there is to most accurately copy the keyboard parts in the songs that are on our setlist. This poses a significant new challenge: sound design. When Chris Rödlach asked me whether I could substitute him for a few gigs in late 2008, I took the offer because I wanted to learn more about how «working» in a cover band is and, more importantly, how it feels, since I generally view myself as a passionate musician whose primary motivation is music and not money and that is not always the case with cover band musicians. The band took me in very kindly and after seven gigs we played together I was gone again, In October 2010, I permanently replaced Chris Rödlach as the keyboardist of the group. I now have a quite comprehensive insight into the business of cover bands. The band dissolved in early 2012, yet rejoins for an annual in-memoriam gig every year.